A few weeks ago my mom asked when Darren and I go to Spain (June 25th) because my sister wanted to have a "Baby Gender Revealing Party" before.

Yesterday she went in for a "free" ultrasound at an antiabortion clinic because nurses needed to practice.  She found out the gender right then and there (she didn't plan to).  Which means, the revealing party was last night.

It all happened so fast, I didn't have much time to pull myself together to shift into the "so pumped for them" mode (which I TOTALLY honestly am, I just have to take a moment to accept that I'm not there).  My mom called to ask if I could help her through the party together.  That I couldn't do.

My mom called again, about an hour before, wanting me to guess the gender.  "I don't care mom, I'm happy either way."  Not good enough, I had to answer.  "A boy" (I guessed this based on my sister's description that all 3 nurses said, "We know FORSURE what it is).  Mom wanted to continue to talk. "Isn't it crazy Robby (our brother who went with her) found out before Joel (sister's husband).  My voice cracks, pull it together Holly, "I don't want to talk about this."  We ended the conversation and I sat down to watch the news.

It just so happens the news was talking about hidden videos at Planned Parenthood that basically said that they never ask why the woman wants an abortion.  They went on to say some women get abortions because the baby is not the gender they wanted.  This was my breaking point.

I let out the tears of frustration, anger, and a little bit of jealously.  It only lasted a minute.  But to think there are women that @#$#@#@^% fertile that they "select" (read in sarcastic happy voice) the gender and decide to try again????  Seriously?

Heidi and Joel had ordered cupcakes with either blue or pink filling and at the party, they took the first bite.  BLUE.  A son.  So much love in the room, so much joy, such a sweet little baby bump starting to shine through.

Again, I find myself with that TERRIBLE clash of feelings.  (I talked earlier about the bitter taste of Hope mixed with doubt)  Last night it was heartwarming joy mixed with heartache.  I'm the older sister, so its hard to watch when usually older sisters go first.

I had another small breaking point.  One of Heidi's friends looked at me with a huge smile and said "You are going to be an AUNT!"  (this is like the 7th person that has said this to me).  "I already am an Aunt," I reply nicely, "My husband's sister had a baby a year and a half ago.  But yes, my first nephew on this side." I swallow hard.  These people are not trying to be rude, but for some reason, the over enthusiastic "You are going to be an Aunts" sting.  It's not "you are going to be a mom" and that's what I want to hear.

The other thing that threw me of was her friend has a baby and was talking about their 6 year plan.  "We will have a second child."  There is nothing wrong with this, but I couldn't help but feel a sense of jealousy that she could say that with such ease and confidence.  I wish I had that.  I begging God for 1.

I'm so excited to meet my future nephew.  This child will have some of my genetic make up.  It could be the closest thing I ever get to "having my own." I will adore him.  But, as I wait, I will still hope for my own as well.

My cute sister and her hubby last night after the reveal... 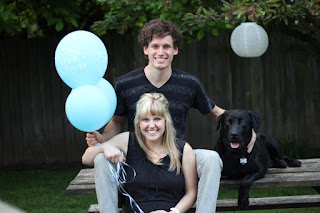