The only downside to hope is it lifts you up...if you fall, it hurts worse than if you had "expected" it.

Unfortunately, Darren could since the anxiety and urgency despite my white lie (with permission) that I wasn't ovulating.  Once he realized, it was over before it began.  It gets in his head and he freezes.

My first reaction was anger and bitterness toward my precious, kind, loving husband.  My mind raced with the morning after morning of staring at negative ovulation kits, bbt tracking, the nathropath junk I do daily, the side effect of the pills, the fact that this window of ovulation hasn't opened for months.  And he couldn't do the 1 thing I asked.  I was also mad at myself for not hiding it better, for not playing it "cool" and clearly playing a role in his stress.
After a failed attempt, I started crying and he said, "Don't worry, we can try when you are actually ovulating."  "I AM" I admitted with a cracking voice.

To all those unaware people that say "At least you can have fun trying" please stop.  You have no idea how bad your words hurt.  In the last 24 our "fun trying" has been

1.  Attempt at night, stress, pain, no success
2.  A midnight attempt, no success
3.  I got the temp rise this morning (meaning I have already ovulated and its probably too late) but out of desperation, Darren leaves work early, and we try for the third time.  Nothing.  Me in tears, Darren feeling helpless.
4.  Last resort, drive to Walgreen's, get a syringe, and try to shoot the semen up me.  By this point, I'm sobbing, the syringe hurts, and hardly comes in. I lay there, with my legs up in the air, headache, tears pouring down my cheeks as Darren tries to comfort me.

Fun trying?
I had to have a few hours of "life isn't fair" "woe is me" "why me" as I mourned the lost of the chance of making a baby.  Every successful cycle I allow myself to dream about getting the double line BFP.  How I'll announce it to my family.  I mourned that too.
But then a gentle whisper in my heart reminded me that God has already written the books of our lives and marriage and before I even ovulated, he knew that we wouldn't have successful sex this round.  Which, is His sweet and gentle way of saying "not yet."  I find comfort in knowing that if this was supposed to be the cycle, it would have worked.  It's hard not to panic.  Obviously if we can't have sex, we can't get pregnant.  At least God is responding by allowing me to ovulate.  Showing me He hasn't forgotten us. 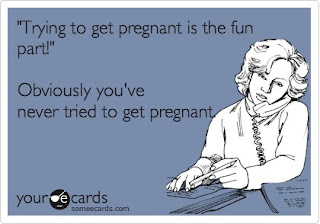