As I was writing my last blog, I got a phone call from the fertility nurse at Kaiser saying I had two "beautiful follicles" that would be ready to go on Sunday (which is only cd 13).  I almost couldn't believe it since I've never had a "smiley face" surge till day 16.  She insisted that I schedule for a Sunday IUI.

Still doubting, I asked if I should take the HCG trigger shot to guarantee.  "Why not" was basically her reply.  She said I would need to take it by 8:30pm (36 hours prior to Sunday IUI).  I couldn't believe it still but thought what the heck.

Although I was still a little emotionally "tender" from the poking and prodding earlier that afternoon, I hoped in my car to drive to the pharmacy the doctor said to go there.  I asked Heidi (my sister) to join.  The whole way there I rambled on and on about cycle days and follicles and LH surges.  My pregnant sister had a glossy look in her eyes (let's be honest, infertility jargon is a foreign language to those outside the "hell").  Despite her not really getting what I was ranting about, she was kind and encouraging.

When we walked into the pharmacy, Heidi squeals with delight.  A couple from our old church were waiting in line with their  THREE DAY OLD BABY.  Heidi was pumped because her kid is due in just a few months.  I sat there, waiting for them to call my number and to give me the $200 shot I would have to inject in my stomach to have a baby.  Or to try to have a baby.  While I was waiting, I couldn't not hear their conversation.

The proud father talked about how there are not words to describe the first time you "hold your newborn in your arms" and how actually seeing the combination of him and his wife is "amazing" and "out of this world."  He had every right to be as happy as he was, but the IRONY of it all was eating me alive.  It was hard not to be slightly hurt/mad at God to allow me in that SECOND to run into them.

They didn't have my shot so we had to drive 45 minutes back to Portland to pick it up (the place I had been a few hours earlier for the ultrasound).

I was scared to give myself the shot, but Darren was even more scared.  He almost seemed upset or terrified at the thought of penetrating me with a needle.  It was easy and pretty painless.  In case low sperm count is still an issue the doctor told us to have sex that night (36 hours prior  just in case I ovulated sooner) and then come in Sunday. 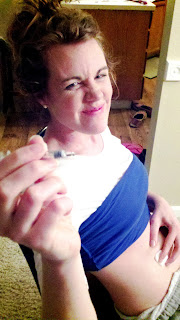 Here is me, right after the injection, holding the dang needle.  Baby, you are going to be SO LOVED.


So, Sunday morning we wake up for the IUI.  I feel really really peaceful.  Really joyful.  Hopeful. We filmed ourselves talking about how we were rooting for twins and on our way to make a baby.   Everything was going smoothly until the doctor called us back....

She said "we need to have a chat."  Basically, his sperm count was only 1.5 million.  This is INSANELY low.  Last time it was freaking 98 million.  I have read in my hours of obsessing and study that 10 million is the best "minimum" but anything under 5 million isn't cost effective.  1.5?

She gave us a minute to talk alone.  We decided something is better than nothing and we were already half way into the process so to go for it.  The IUI was fast.

As I laid there on the table for the 20 minutes after, I couldn't stop the tears.  For the first time I felt like we had finally timed things right (not to mention paid around $600 with all the monitoring, etc) and all we got was 1.5 million with her saying "chances are really low."

For the first time in a long time, I felt rage.  Pure anger.  Mad at God for allowing this.  Mad at Him for not replenishing Darren's sperm.  Mad that ME (poor me) had to lay there and basically watch another month go to waste.

I was so mad that I actually wanted to rip the pregnant lady paper mobile floating above my head in the office.  Since I rarely feel anger, it makes me so uncomfortable and sad.  Then it came, uncontrollable crying.

By the time I cried it out, I was okay.  Scared? Yes.  Worried that I will have to do this whole thing again? Yes.  Upset with the results?  Yes.  Tired of being poked, straddled, and charged lots of money?  Forsure. But we want a baby. 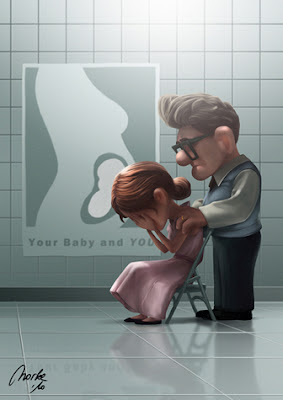