It's funny because out of the trillion blogs/posts/forums/google searches I've encountered in this infertility journey, I always kind of skipped of the D&C.  I didn't really know what it was, and convinced myself mostly likely wouldn't have to "deal" with whatever it was.


What is a D&C Procedure? D&C, also known as dilation and curettage, is a surgical procedure often performed after a first trimester miscarriage. Dilation means to open up the cervix; curettage means to remove the contents of the uterus. Curettage may be performed by scraping the uterine wall with a curette instrument or by a suction curettage (also called vacuum aspiration), using a vacuum-type instrument.

Then, when I found myself in the unfortunate club of miscarriers, I still thought I wouldn't need it since I was losing the baby so early.

However, for Darren and I it was the best choice.  I found out a week ago the pregnancy was not viable, and haven't started bleeding at all.  The OBGYN that worked with me today told me that she has a patient that has been waiting THREE MONTHS!!  Insane.  Mentally, I couldn't keep waiting.

It was a weird feeling last night.  Although I know the pregnancy isn't alive/growing, according to HPT, I'm still pregnant, and the baby is still inside me.  I realized that this could be the closest I ever get to becoming a mother (I know that there is still a lot of hope, but I'm a "realist" as well) and it kind of made me feel sad.  I've been carrying the little embryos for over a month.

The drive to Oregon was long with lots of traffic.  I checked in at 8:30 but they said I don't actually go into surgery till 10:45!  I guess I was spoiled at the RE's office with the surgery being really fast.

For those of you that follow my blog, waiting is the killer for me.  And today my friends, waiting is just what I did.

They took me back to this weird room with lots of curtains and told me to fully undress.  I can usually get away with them letting me where my own dresses but not today.  The nurse put the IV in me like at 9:00.  It was so strange to have it in so soon.

Darren and I talked while I laid on the bed.  at 10:03 they asked me if wanted medicine to help me "calm down and relax."  Yes please!  Can  get some to go as well?  She said it would make me feel kinda loopy and I wouldn't remember a thing.  Ya, about that.  Didn't work at all.  I did feel a little less freaked, but I remember everything word for word (this is all prior surgery).

At 10:35 the OBGYN who will do surgery comes back to introduce herself.  She is the nicest lady I've ever met.  She is with another OBGYN.  They ask me a ton of questions about dates/IVF/egg transfer and say "the odds are really really low, but since your last HCG did go up last week, do you want us to do one more blood test just to be sure?"

So 'just to be sure" they took some blood and left me for another hour (at this pt I've been in the pre operation room for over 3 hours).  The nice OBGYN said, I don't want to give you any false hope, but I'm sure D&Cs have happened where the pregnancy was viable.

My own brain didn't even let one ounce of hope in.  I knew it my heart it was over, but I also knew, hearing the numbers would give me peace of mind I'm making the right choice.

An hour later, the BETA came back at 7,000 something.  If things had been doubling correctly since last week, they should have been FAR into the 30,000+  I wasn't even disappointed.  I wanted to get the surgery done with.

So, they gave me the "relaxation" medicine again and rolled me away to the operation room.  It was so cold!  They put the "sleeping potion" in via the IF and it actually hurt more than I had anticipated.  They said once it starts fading I would fall asleep.  I must have instantly.

About 40 minutes later, when they were rolling me to recovery and I was waking up, I was sobbing.  I don't remember that part but the doctor warned Darren that when he came back I would be crying.  That's really what I remember first, seeing Darren and me sobbing.

I've never in my life been drunk but I heard that alcohol can intensify emotions -good or bad.  I have a feeling all the drugs I was "high" on kind of attacked the sadness I've been trying to bury.  It hit me hard that my womb is now empty and it's over.  I did the hiccup type cry for a few more minutes and then was okay again. 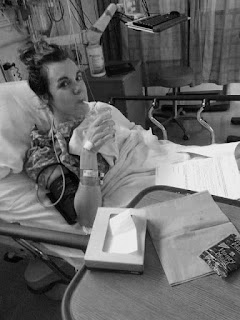 Here's my "lovely" self right after waking up.  Not a good memory but part of our journey for sure :)


The nurse asked if I wanted crackers.  I took some gram crackers.  She said "when was the last time you had gram crackers" and I said "I love them with frosting.  Do you have some frosting?"

Then I put on my clothes and they rolled me to the car, and now I'm home.

I guess I can take a few positives away from all this:

1.  I now have a crazy empathy for women who experience miscarriage. I get it.

2.  Jaden is no longer in my body.  I made the video.  I have closure.  I don't have to "wait" for the miscarriage to start, it's been removed.  I can now start to move forward in our fight for our children.

Found this on a friend's blog.  Makes me sob:

Email ThisBlogThis!Share to TwitterShare to FacebookShare to Pinterest
Labels: D and C