The Movie Noah and Everything Else That Led To Public Meltdown

Yesterday was Darren's birthday.  It started off with a fun brunch downtown Portland with his family.

The last few days I've had some serious PMS (and negative pregnancy test) letting me know that this
last medicated cycle was a bust, which probably adds to my meltdown.

When we got home, I started reading a book I found online called "Brining in Finn." It's about a woman named Sara who had gotten pregnant via IVF with twins but lost them at 22 weeks due to going into preterm labor.  It's an amazing story of her 7 year IF journey. Every since losing Jude and Brinly I have had to be VERY careful about what I allow myself to read.  I'm been gifted a couple different books, but most the time they end up upsetting me.

For example, Darren got me this book for Christmas of a collection of stories of other women that have suffered a loss.  But unless they lost twins, due to my current grief, it almost made me feel more alone.  I had to put the book down when I read a story SO similar to J and B, but in her story, her Baby A made it after delivering Baby B.  While it's amazing she got the miracle, I couldn't help but feel hurt and forgotten that I did not.

All this to say, I thought maybe I was ready to read a story that I knew had hope at the end.  However, yesterday I spent much of the afternoon reading and ended up bookmarking it right after her cerclage failed and water broke.  Tears streaming down my face, I could relate to the story a little too much.  A smooth pregnancy.  Passing all the "safe" milestones.  And then out of nowhere a horrifying nightmare begins and while you are in it you cannot accept its real.

I had to get ready for dinner with the family and a movie.  At dinner I ran into one of my old favorite students.  She graduated a couple years ago and her and I had gotten close.  I truly love her and her twin sister and still keep in contact.  Anyway, this student had an unplanned pregnancy and was pregnant (much further along) when I was pregnant.  We ended up delivering on the same day (she was 41 weeks, I was 18) and we kept in contact during the hospital.  I am so amazed with the selflessness of this girl-her father had told her of a family he knew of who had gone through failed IVF and wanted to adopt.  She made the decision to carry the child and give her to this family.  Although I was pregnant with twins, I had originally been pregnant with triplets.  When I first heard this, I told her that if anything fell through, I would want to adopt her child.  This is odd because overall we don't feel like adoption is the current route for us.  However, if one of my students offered me something like this, I think I would be 100% in.  I knew for a fact I could love her child with my whole heart because of knowing her.  I also knew that the family she had chosen was awesome, and it was "meant to be" since I was pregnant anyway. 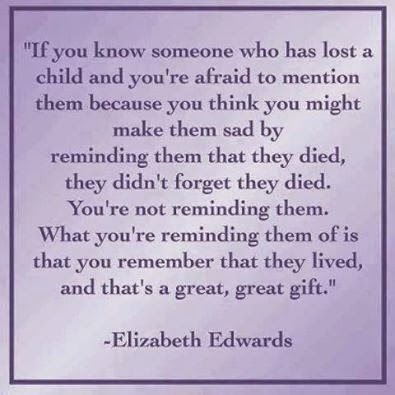 I went up to her to say hi, I hadn't seen her since we were both pregnant.  She ran around, hugged me and then with the sweetest saddest look stepped back, touched her stomach, and frowned at me, acknowledging the sadness that I hide from most people.  In that moment, I felt so loved and I truly felt like she "got it."  "If you know someone who has lost a child and you're afraid to mention them because you think you might make them sad by reminding them that they died, they didn't forget that they died.  You're not reminding them.  What you're reminding them of is that you remember that they lived and that's a great, great gift." Although her child is alive and well, she too experienced a loss to some degree.  She was just pregnant so she could imagine the pain and horror of delivering a baby too soon.  It was one of the first times that someone outside my family had the guts to bring it up and it was beautiful.  She and the adopted parents do open adoption so she gets to see her little girl often.

After dinner we went to see the movie "Noah."  I knew several Christians are in a uproar because its not biblically accurate (it makes it seem way more legend meets magic meets mythical).  I didn't care since it's Hollywood, we were just curious to see the film.  Overall I thought it was kind of lame, with low-budget looking animations (the animals were all clearly fake) and Noah being slightly evil for a bit.  If you want to watch the movie, don't read further, but this was the straw that broke the camel's back (I'm the camel).

Sham, one of his son's, has a wife who is infertile.  Before boarding the arc, Noah's wife asks their grandfather to "bless" her to make her fertile.  Next thing we know his wife is pregnant.  Noah somehow believes all man kind is evil and that God only wants animals on the earth once the arc lands.  There are no women on the arc besides his own wife and his infertile daughter in law.  When he finds out she is pregnant he informs them that if it's a boy he will spare it but if it's a girl, he will kill the baby (to stop future reproduction).  So,  the couple tries to escape, Noah's wife tries to talk some sense into him, but he is 100% set he will kill the baby.

The girl goes into labor, has a girl and then what?  There is another.  Twins.  It's another girl.  She is sobbing freaking out hysterically because she knows Noah is going to kill them.  I don't know if it was the mirrored hysterical cries that started making me uneasy or the twin thing but I thought I was fine.

Next scene she is holding her babies on top of the arc and Noah comes up with a knife.  The babies are crying hard and she asks if she can comfort them first so they can die peacefully.  She calms them down and then Noah says "you shouldn't watch this" and she looks him in the eyes and says "no, they will die in my arms with me"  (cue second huge lump in my throat).  Noah holds the knife above them for a freakishly long time (my eyes shut trying to ask Darren to narrate) and after about 10 seconds of intense suspense, he lowers his mouth and kisses each one on the cheek.  He didn't kill them.

It all set in.  The book I was reading, my old student encounter, the cramping/spotting, and then the cruel reminder that God is my situation for whatever reason DID lower the knife on my twins, I had to walk out, run to a bathroom.  I put my head on the wall and lost control.  I hate crying in public, the type you can't control.  This rarely happens.  I was trying to be quiet but was probably freaking out the other women coming and going. 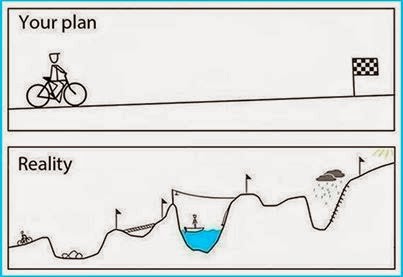 In the car Darren's mom was sweet and said it was hard for her to watch and that she can only imagine how I felt.  I pulled it together but grief is a crazy crazy ride.  I had been strong for so many days.  I found this image on a support group I follow.  It's so true.  The bottom reminds me of grief.