"There are three heartbeats."  I stared at the screen.  Darren and I had been through 7 failed IUIS, an early miscarriage after our first IVF, and a failed FET.  Despite his and the doctor's hesitations, I insisted on transferring 3.  I had had enough.  My body had had enough.  All I wanted was a child and the previous 4 embryos that made it through on the last two IVFs resulted in nothing.

Three heartbeats.  I knew instantly it was 2 boys and a girl.  Darren was white.  I was pumped.  Although I had a clue that multiples could come early, I didn't realize what that meant.  I didn't even know why "hitting 24 weeks" was a thing or a big deal.  I was just happy that after the years of struggle, the years of pain, injections, and tears that I would have a complete insta-fam within 9 months.

I was also arrogant.  I was young, athletic, thin, and tall.  The doctors told me I had a perfect body for carrying three.  I LOVE challenges and I knew I could do it and I knew having three babies at once would be a challenge that I could face with joy.  A friend told me some random story of a woman who was pregnant with triplets and only 1 ended up living.  I said, I am pregnant with three, I will at least end up with 1 as well.

As we drove home I asked Darren "Why do you think God let all three stick now?  Why these ones, after all the failed ones before?"

He was quiet for a moment.

"Triplets will get a lot of attention.  Maybe God wants us to share our story so others can have hope and see His faithfulness."

I smiled.  Yes.  That made sense.  By the time we got home we had already become so excited about this journey ahead of us and couldn't wait to tell our family.  The dream of becoming a mom was a reality.  I saw three heartbeats at 6 weeks, again at 7, then again at 8.  Strong ones.

At 9 weeks I spotted once.  I went in to be safe and sadly found out Baby B had miscarried that morning.  He was the same size as the other two.  I felt sadness but convinced myself that maybe it was for the best for the other 2.

Jude and Brinly continued to grow as our dreams of boy/girl twins grew.  One of each.  I remember placing my hand on my stomach thanking God for His faithfulness and apologizing for ever questioning His goodness from all those painful years of ttc.

Most people know the story.  Something called pPROM that happens to literally .07% of people happened to us.  My water on my daughter broke at 17 weeks.  In the most horrific of events we chose to believe and trust Him for a miracle.  A week later her cord collapsed and killed her (no water to protect her).  I delivered her dead at 18 weeks.  I was awake for her delivery.  Brinly was not a miscarriage.  Many people refer to the twins as that and it stings.  She was 9 inches.  She had a face.

I got an emergency cerclage to try to help my body stablilize and not labor Jude.  I was in the hospital on antibiotics 7 times a day for 10 days.  We begged God to let us make it to just 24 weeks where he could have a 50% chance survival.  Things looked hopeful but again, the things we only think of in our nightmares happened again.  Contractions.  Minutes before I delivered Jude I felt him move.  I actually said outloud "see you on the other side."  He was sick, my body was, and the impact of labor killed him.  My sweet stillborn son Jude Samuel Benson was born 1 day shy of 21 weeks.  Just 22 days away from MAYBE being able to live.


That summer I thought our painful attempts to create a family were finally over, but they were only beginning.

An amazing friend Becky (who actually started a blog about her experience as a carrier, check it out here) carried our biological embryos 3 months after losing Jude and they were born 3 days before his 1 year old birthday.

In the meantime while Becky was going through all the loop holes to become our carrier, I was drownding in grief and the desire to mother living children was becoming an obsession.  I did a few back to back IUIs out of desperation while waiting for her transfer.  Nothing worked, which led us to 11 failed IUIs.

Noah and Beckom have healed our hearts in ways that words will never express.  While I think of Jude and Brinly daily, I don't live in the deep sadness that engulfed us after their death.  I feel awkward when people ask how many children I have or if they say "are you going to try for a daughter."  There are days when I still cry, if I really think about what happened.  But then I cry again when I remember the engraved scene in my end of the doctors pulling out my living sons from Becky's stomach-an overwhelming feeling of gratitude, humbleness, and thankfulness as I basked in the redemption that Jesus finally brought us.

We had some frozen embryos left.  Despite my hellish pregnancy, I had not lost the desire to carry a child.  We had always wanted 3.  The doctors had told me that by transferring "just 1" and taking some precautions I would have a better chance.

This January 2016 we transferred our only female embryo, making it my 4th IVF.  She didn't implant.  This brought back some waves of emotions but we were determined to face infertility again.  We were able to grieve the idea of ever having a daughter here with us as it allowed us to know and choose that moving forward would mean another son.  This was helpful in the sense that we had time to see the pros of another boy/all boy family and get excited.

We transferred again in March.  I had never done IVF so closely to each other and Darren and I had both agreed that if this 5th IVF didn't take that we would take a long break from the shots/hormones etc.  My gut told me from the beginning he would implant.  He did.

When you know you have only boy embryos left and have been trying to conceive for almost 6 years, you have a lot of time to pick names.

Darren and I always loved Jude and Judah.  Noah and Beckom's names are so meaningful to us because of the "rainbow" in the Bible and Beckom is a combo of Becky and Tom's names...this one though?  Judah.  During my 2 week wait I looked up the name.  Biblically Judah was the fourth son of Jacob and Leah.  He will be our fourth son as well.

I would be lying if I didn't say that this pregnancy has been easy. I have lived on egg shells since the injections began.  For months and months I was convinced I was in pre-term labor or my water was breaking or I was miscarrying.  Besides delivering Jude and Brinly, this is mentally the hardest thing I have ever done.  Panic, fear, anxiety, have been a part of my daily life.  Choosing to try to carry again after stillborn twins born at different times brings up A LOT of PTSD that I didn't see coming.  It again challenges my faith.  But the idea of birthing a live child from my body, although it seemed impossible for years, is starting to look like a reality.

I'll be posting a bit more about all that this rainbow pregnancy has entailed (including my surgery, MFM appointments, etc).  In the meantime I'm working on a new blog called "Raising Captain America."  I will be the mother to THREE boys who all happened to be frozen, just like him <3  My goal is to make Captain America their fav.


Here is us on transfer day, March 21 (notice I'm sporting the Cap. America shirt to support my little frozen baby boy).  If you want to see updates on little Noah and Beckom (TWO in November!) my Instagram is hbenson10 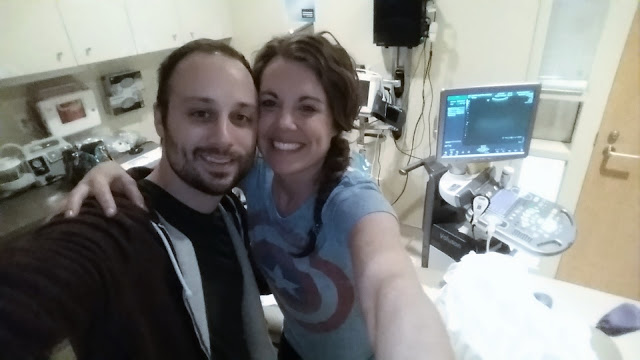